An analysis of 20,000 players and their bank standing equipment

This post discusses an analysis of the equipment of 20,000 Old School RuneScape players who were bank standing at the Grand Exchange. If you are interested in the method used to gather and analyze this data, check out my post entitled Watercooler: Player Scraper - A RuneLite Plugin to Dump Player Equipment. The data analysis was performed and a short and sweet infographic produced that summarized some of the interesting findings. 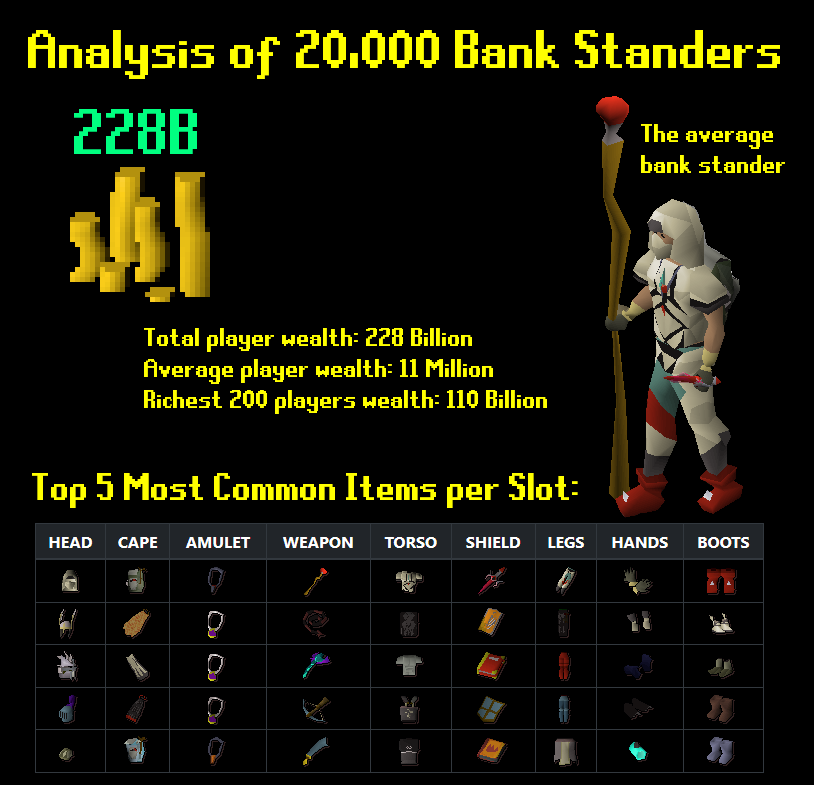 The infographic really speaks for itself. It outlines a collection of interesting information such as the most common items, a summary of equipped item wealth and most common equipment in each item slot. However, if you want to read more about the analyzed data and the analysis results please read on!

It is probably important to start with a summary of the data that was collected and analyzed. As I have mentioned, the data set includes the equipment items worn by exactly 20,000 Old School RuneScape bank standers at the Grand Exchange. The players were analyzed from a variety of different sources including:

The dataset only includes specific equipment slots - this is due to a limitation of the RuneLite client being unable to process certain equipment slots. I am unsure exactly why this is the case - but have an idea that equipment slots that are not visible in-game are also not available. The unavailable equipment slots are:

Nevertheless, all other equipment slots are available including:

As you can see, the data set has a variety of players with varying combat levels. There is an overall trend seen with the gradual increase in the count of players at each combat level. However, once you reach around combat level 120 or so, there is a great increase in the player count for each of these levels. This is probably caused by a large number of dedicated (!) players that have max, or nearly max, combat stats. In addition, there is a large number of level 3 combat accounts, which are most likely bots, or maybe pure skillers!

One of the most interesting stats I wanted to look at in the data set was the most popular items that were worn in each equipment slot. Some were surprising, some not so surprising. If you took the most commonly occurring items from each equipment slot, your bank standing character would look like the flashy guy below…

Pictures are great… but what about the stats! I analyzed the data further and determined the most common five (5) items for each equipment slot. The results included in the tables below provide the item name, the inventory icon of the item, the total count of time that the item was witnessed and finally, a percentage that the item was witnessed out of the 20,000 players analyzed.

Another aspect of the data that was interesting was how much wealth was witnessed in the 20,000 players. When adding together all of the items for each player and performing an item Grand Exchange price lookup using the OSBuddy GE prices, there was a grand total wealth of 228,028,700,715 gold coins! That’s over 228 billion gold coins. However, this does not include any un-tradeable items, as they have no GE price.

If you divide the total wealth by the number of players analyzed, each player had an average wealth of 11,401,435… That’s almost 11 million gold coins of item wealth per player! Alas! The truth is not such a beautiful fairytale… If you take the top 1% of all players (that is 200 players), they have an approximate total wealth of 110 billion. That is just less than 50% of the complete wealth of 20,000 players!

Based on the current OSBuddy GE prices, the top 5 wealthies players were:

The major stats regarding item wealth are listed below:

Writing this post was a pretty fun journey for me… I hope that you found it an interesting and informative read. If there is something you think I should have included in my analysis, please leave me a comment below - I am happy to look further into the data. Also, please feel free to ask any questions if you have them.